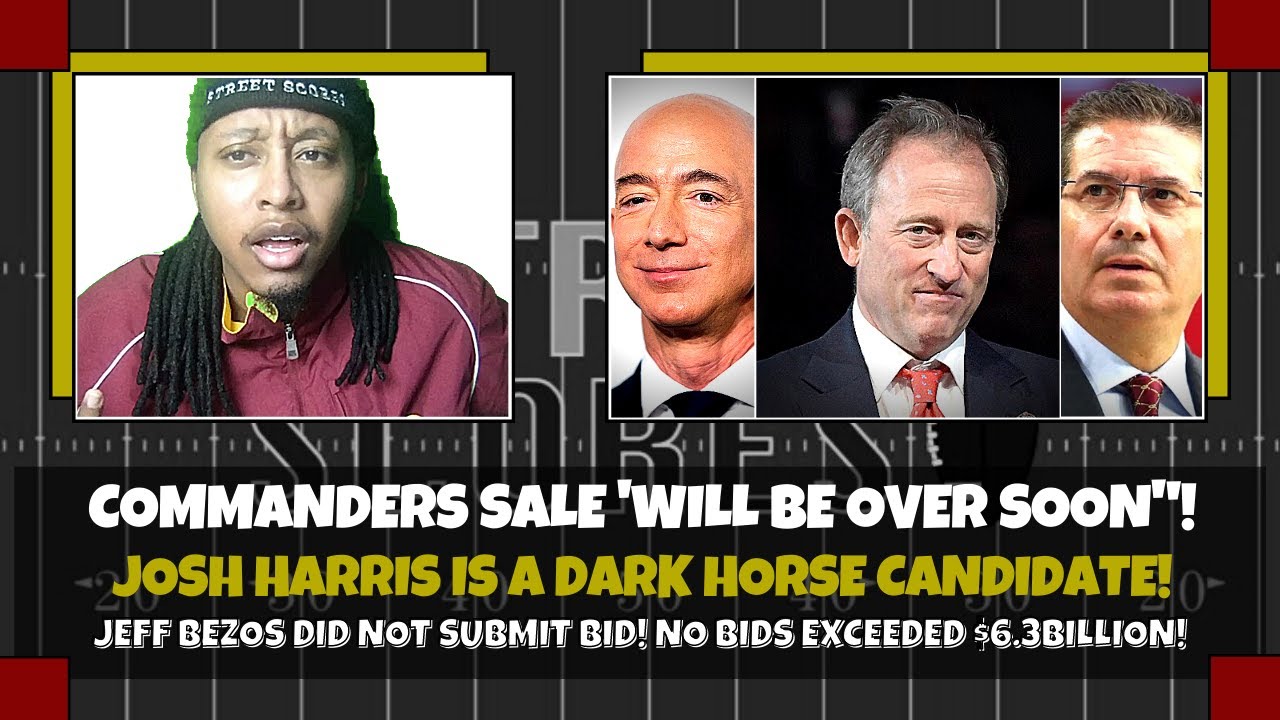 Welcome to Street Scores! It’s your boy Rico giving y’all some more heat! DAILY W.F.T NEWS! Very important topics! JUST IN! Here, I give ya’ll all of the background information, speculations, professional insights and opinions, critical analysis, and everything else concerning all of rumors surrounding Washington Commander’s chances of having the BEST POSSIBLE 2023 offseason plans & opinions & evaluations! Free Agency & draft!

MAKE SURE YOU ALL JOIN THE BEST WASHINGTON COMMANDERS DISCORD! IM GOING TO BE IN HERE ALL THE TIME! Here’s the invite link: https://discord.gg/Vjau9XVCvR

A.J. Perez
@byajperez Amazon founder Jeff Bezos hasn’t submitted a formal bid for the Washington Commanders, sources tell @FOS. Minus Bezos, none of the half-dozen bids ahead of last month’s first-round deadline exceeded $6.3 billion.
JP Finlay @JPFinlayNBCS No Bezos doesn’t mean no sale. In fact I heard today from a source close to the situation that “it will be over soon”! If you had “100 hypothetical chips” who would you say we should be keeping an eye on! Joshua Harris (born 1965) is an American private equity investor and philanthropist who co-founded Apollo Global Management, one of the world’s largest alternative investment firms. Harris is the principal owner and managing partner of the New Jersey Devils of the National Hockey League and the Philadelphia 76ers of the National Basketball Association, and is a general partner in Crystal Palace of the English Premier League. Bloomberg estimated his net worth to be around US$7.05 billion in July 2021! Jeff Bezos didn’t place a bid for the Washington Commanders ahead of last month’s deadline, sources with knowledge of the process told Front Office Sports. But that doesn’t mean the Amazon founder is out of the running for embattled Dan Snyder’s franchise. Minus Bezos, none of the half-dozen bids submitted before the first-round deadline on Dec. 23 for the Commanders came exceeded $6.3 billion, a source said. 2 main reasons why:
Bezos didn’t come strong with a huge number, setting up a situation where he’d initiate an early bidding war!
Other billionaires interested in the Commanders have realized that getting public financing for a new stadium could be difficult. A domed stadium, like the one Snyder, had plans to build, was estimated at $3 billion. Snyder announced in November that the team would explore a franchise sale could reach $8 billion, set a worldwide sales record for a sports franchise. Snyder led a purchase of the Commanders for $800 million in 1999. league approved a debt waiver in March 2021 so Snyder to finance a large chunk of the $900 million needed to buy out three co-owners who owned 40% of the team.

Let Me Know:
How do YOU feel about everything i discussed in this video⁈

DONATE ANYTHING! Please Support the Channel! Even if it’s Just $1! INCLUDE YOUR YOUTUBE NAME IN A MESSAGE when you send the money for a shout out!
HOW TO DONATE:
https://streamlabs.com/streetscores/tip
Paypal: williamhc94@gmail.com
OR
CashApp: $RicoScores
OR
Click the “$” Where you Chat At!

Some of the photos and videos used in this video are found through Google and are not owned by me. All music is either owned by me or has been given permission to use by my cousin Lyriq Harper.